Evaporation is the process by which an element or compound changes from its liquid to a gaseous state below the boiling point. In most cases, it is critical that the product undergoes minimal thermal degradation. This necessitates minimizing temperature and time exposure. Along with other requirements imposed by the physical properties of the processed product,  this has resulted in the development of a diverse range of evaporator types. By all means, evaporation plants are widely used in the field of thermal concentration technology for the concentration of liquids in the form of solutions, suspensions, and emulsions.

Established in 1989, we at ALAQUA have more than 25 years of experience. We are leading manufacturers, offering a supply of evaporators, distillation plants, crystallizers, solvent recovery systems, and other process equipment.

In falling film evaporators, liquid and vapors flow downward in parallel flow. The concentrated liquid is preheated to boiling temperature. Through a distribution device in the evaporator’s head, an even thin film enters the heating tubes, flows downward at boiling temperature, and is partially evaporated. The co-current vapor flow augments the gravitationally-induced downward movement. Falling film evaporators can operate with very small temperature differences between the heating media and the boiling liquid. They have very short product contact times, typically only a few seconds per pass. These properties make the falling film evaporator ideal for heat-sensitive products, and it is now the most commonly used type of evaporator.

However, falling film evaporators must be carefully designed for each operating condition. Adequate wetting of the heating surface by liquid is critical for the plant’s trouble-free operation. Dry patches and incrustations will form if the heating surfaces are not sufficiently wetted; at worst, the heating tubes will become completely clogged. In critical cases, extending or dividing evaporator effects while maintaining the benefits of single-pass operation can increase the wetting rate. To achieve full and even product wetting of the tubes, the liquid distribution system must be properly designed.

These work on the basis of the “thermo-siphon” principle. As the feed enters the bottom of the heating tubes, steam begins to form. Because of the ascending force of the steam produced during boiling, liquid and vapors flow upwards in parallel flow. Simultaneously, vapor production increases and the product is pressed as a thin film on the walls of the tubes. As a result, the liquid rises upwards. This co-current upward movement has the advantageous effect of increasing turbulence in the liquid. This is beneficial when evaporating highly viscous products or products that tend to foul the heating surfaces.

Typically, the temperature difference between the heating and boiling sides of this type of evaporator must be quite large. Otherwise, the vapor flow’s energy is insufficient to convey the liquid and produce the rising film. Typically, the length of the boiling tubes will not exceed 23 feet. This type of evaporator is frequently used in conjunction with product recirculation, in which some of the formed concentrates are reintroduced back into the feed inlet. This is to produce sufficient liquid loading inside the boiling tubes.

Forced circulation evaporators are used to avoid boiling the product on the heating surfaces due to the product’s fouling characteristics. The circulating liquid is heated as it flows through the heat exchanger and then partially evaporated as the pressure in the separator is reduced, allowing the liquid to cool to the boiling temperature corresponding to this pressure. Because the liquid is typically only heated a few degrees for each pass through the heat exchanger, the recirculation flow rate must be high.

As there is no evaporation and thus no concentration increase on the heat transfer surface, this type of evaporator is also used in crystallizing applications. When the liquid is flash-evaporated in the separator vessel, it evaporates. This is where crystals form in crystallizer applications, and special separator designs are used to separate crystals from the recirculated crystal slurry. Depending on the specific requirements, the heat exchanger can be arranged horizontally or vertically.

Plate evaporators are small in size. Short interconnecting pipework connects the separators to the plate packages. As a result, space requirements are minimal, and heights are typically limited to 20 to 25 feet (6-8 meters). As a result, plate evaporators can be installed in the majority of buildings. Framed plates can be used as a heating surface instead of tube and shell heat exchangers. These plate assemblies are similar to plate heat exchangers but have larger vapor flow passages. A product plate and a steam plate are connected alternately in these units.

The product passage is designed to ensure even liquid distribution on the plate surfaces and a low-pressure drop in the vapor phase. Because the plate package is easily opened, surfaces can be inspected, individual plates can be changed as needed, and the evaporation rate can be adjusted by adding or removing individual plates. The units can be designed to meet USDA Dairy sanitation standards.

Difference between an Evaporator and Condenser 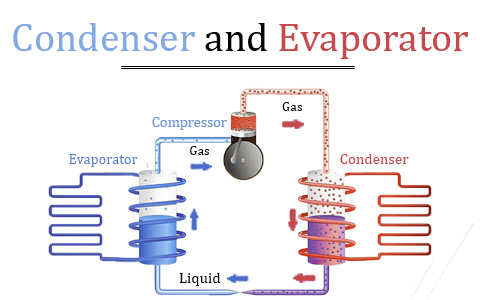 Condensers’ working mechanism is an exothermic process, so you can expect them to be hot while they’re working. Power plants are excellent examples of industrial condensers. Condensers in power plants are assigned the task of condensing the vapors from the turbines.

Problems of Working with Evaporators

It is important to realize, evaporation can cause technical issues, especially when it is used in the food industry. Some evaporators are sensitive to differences in dilute solution viscosity and consistency. Because of a loss of circulation, these evaporators may work inefficiently. If an evaporator is to be used to concentrate a highly viscous solution, the pump may need replacement. When hard deposits form on the surfaces of the heating mediums in the evaporators, fouling occurs. Proteins and polysaccharides in foods can form such deposits, reducing heat transfer efficiency.

Foaming can also be a problem because dealing with excess foam can be time-consuming and inefficient. Antifoam agents must be used, but only a few can be used during food processing. When acidic solutions are concentrated, corrosion can occur. Surface damage can reduce the long life of evaporators. Food quality and flavor can suffer as a result of evaporation. Overall, when selecting an evaporator, the qualities of the product solution must be carefully considered.

The main requirement in the field of evaporation technology is to keep the liquid’s quality while evaporating and to avoid product damage. This may necessitate exposing the liquid to the lowest possible boiling temperature for the shortest amount of time. This, along with numerous other requirements and constraints, has resulted in a wide range of designs available today. For many years, ALAQUA has been successfully supplying a wide range of evaporators to various industries. We train your employees and assist you in finding the most cost-effective solutions to increase your efficiency and profits.

Yes, we serve a domestic and international base of customers. We also supervise installation and start-up with personnel training for every application. We respond to any troubleshooting calls 24/7.

Corrosion and scaling are recurring issues for evaporator operators. They begin by reducing capacity and increasing energy consumption, but can quickly lead to significant downtime and maintenance. We offer smart engineering to avoid extensive chemical softening of feed, which increases operating costs.

During commissioning and start-up, we will train the personnel designated by the Customer in proper operating and maintenance procedures for a per diem fee, plus travel and living expenses to be reimbursed at cost. To facilitate training, as well as ongoing operation and maintenance of the equipment module, we will supply an Operations and Maintenance Manual. Complete specifications and supporting information on all auxiliaries (such as pumps, motors, and instrumentation), as well as copies of the Process Flow Drawing, Process Piping and Instrumentation Drawing, and General Arrangement Drawing, will be included.