The solvent recovery systems process takes effluents and extracts valuable solvents and raw materials from the waste stream of a manufacturing process. A variety of procedures or technologies can be used to recover solvents from wastewater. Solvent recycling machines perform distillation to remove dirt, debris, and oils from old cleaning solvents, allowing the cleaning solvent to be reused. Solvent recovery systems for old solvents can cut solvent purchases by more than 95% and chemical waste disposal costs by more than 90%. 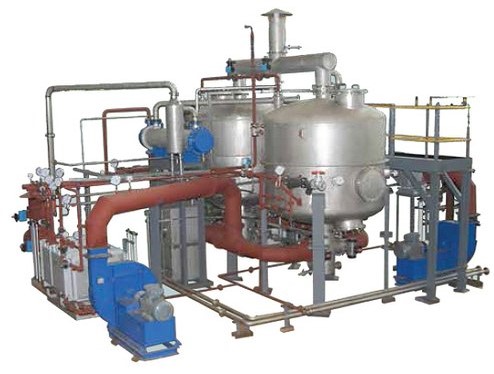 How Does Solvent Recovery System Work?

Distillation separates volatile and nonvolatile solutions in a solvent, and this is how solvent recovery systems work. Similar to how a vapour degreaser works, the solution is boiled, then the vapours are condensed back into liquid in a separate tank. The temperature at which the various elements of the solvent and impurities boil differs: usually, oils and soils boil at significantly higher temperatures than solvents. Paint thinner, which is used to remove paint from paint guns and parts, is a good example of this; the solvent boils at considerably lower temperatures than paint, therefore boiling the mixture results in a condensed pure solvent in one tank and paint sludge components in another.

Simple vs. Fractional Distillation And Separation Process of Multiple Solvents

Condensing hot boiled vapours directly from the solvent recycler’s boiling tank is referred to as simple distillation. Only one volatile solvent may be recovered since the condensing takes place near to the boil “sump,” and the purity of the solvent may contain trace amounts of non-volatile contaminants conveyed by the boiling, volatile vapours. Vapour degreasers work in the same way. While the recovery of a single volatile solvent can reach 99 percent or greater in some cases, higher recoveries are sometimes required.

Latest Blog: Selecting The Evaporators Based On Processing Requirements

Fractional distillation is used when better purity recovery or separation of two or more volatile components (for example, water, and isopropyl alcohol) is required. To achieve greater purity solvent recovery and separation of distinct volatile solvents, fractional distillation uses a reflux column between the boiling tank and the condenser coils. This technique can achieve 99.9% solvent recovery and solvent purity above 99.9%, which is frequently required for electronic/PCB manufacturing, medical device production, and aerospace applications.

Higher boiling and heavier-than-air (vapour density greater than 29 AMU – atomic mass units) solvents, such as xylenes, CFCs, and others, may necessitate the use of a vacuum on the distillation column and chamber vs. alcohol, MEK (Methyl ethyl ketone/butanone), lighter-than-air acetones, MPK (Methyl n-Propyl Ketone), etc.

Benefits of a Waste Solvent Recovery System and Recycling

Stages or Process of Crystallization

What is a Spray Dryer and How does a spray dryer work?