An evaporator is a heat exchanger that is designed to heat a certain compound while still separating water by evaporation. AlaquaInc supplies different kinds of evaporators technology for food, pharmaceutical, and other processing industries to fulfill the industrial processing equipment demands.

Evaporators have traditionally been used in manufacturing processes. In the food industry, for example, water is removed from foods to maximize the concentration of the solid portion, achieve the optimal flavor and appearance, and extend shelf life. Another example is the pharmaceutical industry, where eliminating humidity improves the chemical stability of the finished product. Evaporators have begun to be used for energy generation in recent years. In this scenario, the steam is expanded in a reactor after it has been evaporated. 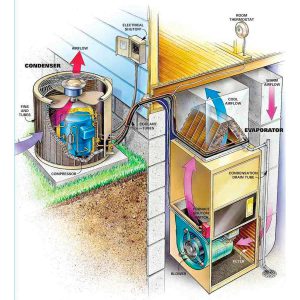 This form of an evaporator, also known as calandria or Robert, was the first to be commonly used in manufacturing and is still used today. At the bottom of the shell, inside a small tube evaporator, a bundle of heat exchange tubes is enclosed in another steel cylinder (also known as calandria). Steam enters the cylinder and heats the tubes, and heats the compound, which must be dehumidified. The steam and the dehumidified compound will escape from the upper and lower parts, respectively, at the end of the evaporation period.

Evaporators may be made up of one or more results, each of which consists of one or more bodies acting at the same boiling point. The vapour from one body heats a second body with a lower boiling temperature in a multiple-effect evaporator. The first effect is directly heated by steam, and the bodies after that are arranged according to their boiling temperatures (or pressure). 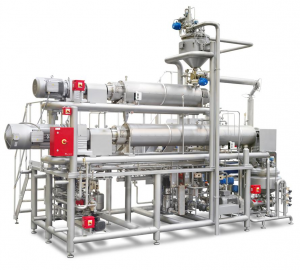 To lower the boiling temperature, evaporator bodies are usually worked under a vacuum. To generate a vacuum, steam ejectors or mechanical vacuum pumps are often used. A single pump or a series of pumps can be used, depending on the amount of vacuum needed for the last result, which has the lowest boiling point. Noncondensible gases that emerge as dissolved gases in the feed or from air escaping into the evaporator body are often removed by vacuum systems. To condense the vapour leaving the last evaporator effect, most evaporation systems have either a direct or indirect water-cooled condenser. This raises the system’s vacuum. Since the vapours produced are completely condensed inside the heating portion of the evaporator, mechanical vapour recompression (MVR) evaporators do not need an external condenser.

The primary way to improve an evaporator’s steam economy is to reuse the latent heat of the water vapour. The water vapour from one effect is used as the heating medium for the next effect, which has a lower boiling point. The latent heat in water vapour may also be reused by compressing it to a higher pressure and temperature, either thermally or mechanically. These three methods of increasing performance, however, have limitations that are determined by the physical properties of the liquid feed being evaporated.

What are the Industrial technologies for evaporation and crystallization?