A falling film evaporator is a type of heat exchanger that uses a shell and tube design to evaporate heat-sensitive liquids. The feed is pumped into the evaporator from the top. It’s then uniformly dispersed throughout the heating tubes of the device. While partially evaporated, the liquid flows through tubes, forming a thin layer on the tube walls. To guarantee a high heat exchanger coefficient, the heat is given through the heating medium (usually steam). Under the influence of gravity, the liquid and vapour move downhill. The vapour flow in the co-current direction aids the liquid’s downward descent. At the bottom of the falling film evaporators unit, the concentrated product and its vapour are separated from one another.

High and efficient heat transmission is ensured by a standard technique used during material selection that considers the feed qualities. The distributor head that feeds into the tubes is intended to guarantee uniform wetting of the tube surfaces, preventing crusting, which is the source of many of the major maintenance issues with falling film evaporators. 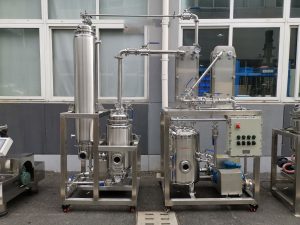 The development and maintenance of a very thin film of rapidly descending liquid laminated to the internal surface of the evaporation tubes allow falling film evaporators to attain their excellent thermal performance. The contact between the process liquid and the heating medium is maximised by an equally dispersed liquid layer, allowing for the fastest energy transfer from the media to the process fluid. This entails quicker evaporation rates and the capacity to employ a cooler heating medium, both of which are advantageous for treating thermally degraded materials.

To attain this high degree of performance, the descending liquid must be evenly dispersed throughout all of the tubes, equally disseminated around the circumference of each tube, thoroughly laminated to the inside surface of each tube, and travel down each tube at the optimal velocity. Tubes that haven’t been adequately wetted can cause thermally labile products to degrade, are the leading source of fouling evaporators services, and have poor thermal performance.

Alaqua optimizes its flow lamination technology for each FFE it designs and builds. When designing the flow lamination system, Alaqua acknowledges that various applications may have a unique mix of variables, such as solids content, extract content, desired (percent) reduction in the solvent, and vapour velocity, which must be taken into account. The result is a small FFE with high throughput, little fouling, and consistent, regulated evaporation temperatures.

Various interpretations of falling film evaporators are quickly gaining favour, particularly in the hemp business. The performance and dependability of an FFE are highly dependent on the designer’s real technical skills. Alaqua takes pleasure in offering high-performance equipment and equipment services that have been meticulously developed, produced, and are field tested. Contact us today to know more about our processing equipment and its services!