Crystallization is the process of solid crystals precipitating from a solution, either naturally or artificially. It’s also a chemical solid-liquid separation process that involves the mass transfer of a solute from a liquid solution to a crystalline phase in the form of a solid. As a result, crystallization is a precipitation process resulting from a change in the solubility of the solute in the solvent. Nuclei creation and crystal development are the two key processes in the crystallization process. Alaqua is a processing equipment supplier for the evaporator, crystallizer, distillation equipment, spray dryer, heat exchanger, and solvent recovery systems.

Crystallizing the sugar solution is required for manufacturing icings, frostings, or sweets such as fondant and fudge. Nuclei must develop in the fluid before crystallization can begin. Crystals are formed by adding solution material to these nuclei. The type of the crystallizing material, the concentration, temperature, agitation, and contaminants present in the solution all influence the rate of nuclei production and crystallization. 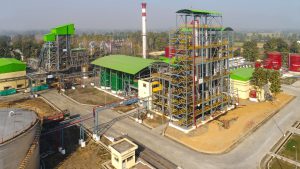 Nature of crystallizing substance: Some substances, such as salt, crystallize rapidly from a solution of water. Nuclear formation begins with only a small super-saturation, and any additional salt in the solution beyond the saturation threshold crystallizes. Some chemicals, such as salt, do not readily form nuclei or crystallize. When it comes to sucrose, a high level of supersaturation is frequently required before crystallization can begin. Compared to levulose, sucrose crystallizes faster.

Nuclei formation: A supersaturated solution is required for nuclei to form for crystallization to proceed. Several variables impact the nuclei creation process, which involves the joining of atoms to create nuclei. A few nuclei may develop spontaneously in various areas if a solution is permitted to stand, and crystallization proceeds from these nuclei. The crystals grow to a considerable size when just a few nuclei form spontaneously in the solution. In most cases, nucleus production and crystallization do not commence right after supersaturation. Specks of dust in the solution may help accelerate nuclear production. The pace of nuclear production is sped up by agitating or churning a solution. A decline in temperature encourages the creation of nuclei initially but eventually slows it down. Seeding a solution can be utilized to start crystallization instead of waiting for nuclei to develop spontaneously.

Seeding: Seeding is the technique of adding crystals of the same substance to start crystallization. These crystals act as nuclei for the formation of new crystals. If the number of crystals supplied is considerable but the size of the crystals is modest, the solution contains many nuclei and the resultant crystals are tiny. The nuclei generated are few in number and the crystals created are massive if the amount of material supplied is minimal. Many people believe that all crystals are large enough to be seen, however many are actually incredibly little, so small that they may float in the air. If crystals are floating in the air, they may act as seed solutions, causing crystallization to begin.

Rate of crystallization: New molecules from the solution are deposited in a regular sequence or way onto the nuclei generated in the solution, resulting in a characteristic shape for each crystal. A crystal’s growth rate might differ depending on which side or face it is on. The rate of crystallization refers to how quickly nuclei expand in size. The concentration and temperature of the solution may promote this pace; foreign elements may slow it down.

Solution Concentration: The formation of nuclei is aided by a concentrated solution. 114°C fondant syrup cooked to 111°C has less water and is more concentrated. As a result, the one cooked to 114°C forms nuclei more easily. If the degree of supersaturation is not too considerable, large, well-shaped crystals form more easily. Supersaturation between 70° and 90°C is the most favorable for crystal formation in a sucrose solution cooked to 112°C. When the syrup is swirled at these temperatures, crystallization takes place in a relatively short period, but the crystals generated are bigger than when the syrup is cooled to a lower temperature. The growth of tiny crystals necessitates supersaturation and a low temperature.

Crystallization Temperature: It is a well-known fact that when chemical precipitates are crystallized at high temperatures, they tend to become more coarsely crystalline. This is how sugars work in general. Other factors being equal, the coarser the crystals created, the greater the temperature at which crystal formation takes place.

Agitation: Stirring a solution promotes nuclei production while preventing the deposit of solution material on already formed nuclei. As a result, crystals in agitated solutions do not grow to the same size as crystals that form naturally. If tiny crystals are sought, the circumstances must allow for the formation of a large number of nuclei. If the syrup is agitated until the bulk is kneadable, small crystals can be formed in syrups of known concentration and temperature. Some nuclei are created when the syrup is churned for a brief period, but when the agitation is halted, the development of additional nuclei is discouraged, and crystal growth is encouraged. If tiny crystals are needed, it is critical to mix candy and frosting syrups until almost all of the material has crystallized.

Large sugar crystals can develop when impurities in the sugar syrup are present. Impurities encourage the production of premature crystals, which can grow to be large and bothersome.

Interfering substances: Certain goods can be introduced to inhibit crystal formation and development. Interfering agents are things like cream, butter, and egg white. The agents cover the crystals and prevent huge crystals from forming. Boiling the sugar syrup to the correct temperature is very critical, as is ensuring that the sugar is completely dissolved.

Degree of inversion: Sweets with a high sugar content (sucrose) may crystallize during production or storage (commonly referred to as graining). Although this is beneficial in some items (such as fondant and fudge), it is seen as a quality flaw in most others.

When a sugar solution is heated, a portion of the sucrose is converted to invert sugar. This inverted sugar prevents sucrose crystallization while also increasing the total sugar content in the mixture. However, because of this natural inversion process, it’s impossible to predict how much inverted sugar will be created. Certain substances, such as cream of tartar or citric acid, may be used to limit the amount of inversion. These additives speed up the conversion of sucrose to invert sugar, increasing the total proportion of invert sugar in the solution. Adding glucose syrup, which will immediately increase the quantity of inverted sugar in the mixture, is a more precise way of assuring the right balance of inverted sugar.

The amount of inverted sugar in the sweet must be kept under control since too much will cause it to absorb water from the air and become sticky. If there isn’t enough inverted sugar, the sucrose will crystallize. A non-crystalline product requires about 10-15% inverted sugar.

Added ingredients: The temperature of boiling can be influenced by the addition of specific components. When liquid milk is used to make toffees, for example, the moisture level of the mixture instantly increases, necessitating a longer boiling time to obtain the necessary moisture content.

The shelf-life of the sweet is also affected by the additional additives. The viscosity of toffees, caramels, and fudges, which include milk solids and fat, is greater, which prevents crystallization. Fats, on the other hand, may cause the sweet to get rancid, reducing its shelf life.

Six Signs That Your Furnace Heat Exchanger Is Failing