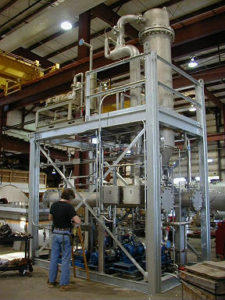 Distillation is a method of separating chemical substances based on differences in their volatilities in a boiling liquid mixture. Distillation usually forms part of a larger chemical process, and is thus referred to as a unit operation.

Commercially, distillation has a number of uses. It is used to separate crude oil into more fractions for specific uses such as transport, power generation and heating. Water is distilled to remove impurities, such as salt from sea water. Air is distilled to separate its components – notably oxygen, nitrogen and argon – for industrial use. Distillation of fermented solutions has been used since ancient times to produce distilled beverages with a higher alcohol content. 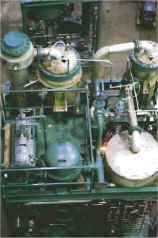 reuse of degreasing and washing solvent. Through use of the solvent distillation machines, they separate the contaminants (resins, polymers, pigments, paints, oils, etc.) from the original solvent.

The distillation of the solvent is accomplished by a peripheral heating jacket filled with diathermic oil, heated by an electrical element. This means that during the solvent distillation process, the heating source is never in contact with the solvent being distilled. The solvent vapors are then conveyed to a condenser, cooled by air or water. The distilled solvent is collected in a tank, for its reuse.

Specially designed doctor blades can mix the waste solvent being distilled so that the discharge of the distillation system is a powder or a flake. Without the doctor blades, the solvent distillation machine would reduce the waste to a thick syrup or paste. If you distill to a powder or a flake, often the result is that the discharge can be disposed of as a non-hazardous material. Obviously, if your distillation waste is a thick syrup, you may have to dispose of it as a hazardous material.

To learn more about our distillation equipment, please contact us today.